“Look for the helpers. You will always find people who are helping.”- Mr. Rogers

I know who you are. You are the person that can’t help but tear up every time you hear the song “Fight Song”. You can’t see a small child with a beanie cap covering their entire scalp without wondering if they have cancer. You have had more Lysol cans and Lysol wipes in your house than most people will ever buy. You have a favorite parking lot at a hospital somewhere. You make sure you always have change or a few dollars on the credit card for the vending machines. You have a yellow cancer ribbon somewhere on your car. Your back hurts from sleeping in bad hospital chairs and beds. And you know more about IV’s, phlebotomy, X-rays, MRI’s, bone scans, and can read lab results better than most 3rd year medical students. I know who you are, because I am that person too.

Someone you love has cancer.

My grandson Andre was only four years old when he was diagnosed with leukemia a few months ago. When we were thrust into the world of cancer the first thing I noticed were the helpers. Even as we grappled with the shock and pain of what we were hearing from the doctors, we were also confronted with relief that we were not alone. Not even close. And by this I don’t mean the patients, though my grandson took the last room available on the floor that night, so there was plenty of company. What I mean are the wonderful people who take time out of their day to go and support those stricken with cancer. I was and still am astonished by these people.

That first day at the hospital was stressful. Andre wasn’t showing signs of sickness, but we knew that that would change soon. The medicines were going to change that. They were going to make him feel sicker than he ever had felt before. There was nothing we could do to change that.

On that same day when we entered the hospital there was a large group of people in the 4th floor lobby (pediatric oncology) just outside the nurses station. I saw five women and four men of all ages, and in all stages of sadness. One young lady was crying uncontrollably. When we settled Andre into his room I came back out to get something from the snack machines. As I stood there trying to decide what to get I was able to figure out that the young lady was crying about her 5 month old baby who had been diagnosed with cancer the week before. I kept hearing her say “Why isn’t he here yet?” in Spanish. I thought maybe some family member was still missing, but moments later one of the boys said, “he’s here”. I saw the priest walk out of elevator and they all started crying again.

And just like that a little baby was baptized, and given his last rites all in the same day.

But then the helpers find you. They come quick too. Before Andre got a chance to get too low you start seeing these special people come in and out of the hospital. People dressed as super heroes fill the halls. Superman, Batman, and the Ninja turtles all show up to say hello to him. Strangers brought him food and gifts all year round. TV personalities and professional athletes show up to take pictures with him and tell jokes. The playroom is always filled with high school volunteers wanting to play games with him.

And you make friends. Andre quickly made friends with a young boy named Javi (also a 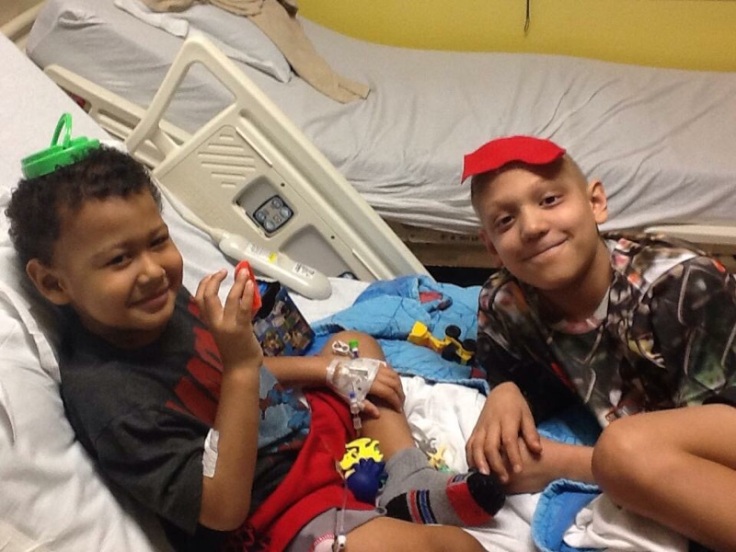 cancer fighter). When the medicines put him in a bad mood and Javi was around he can always be counted on to make things better. Javi has a kind heart and a contagious smile and he shared it with everybody.

Andre’s page on Facebook. She said she wanted to put together a fashion show for Andre with the idea that he would get all the proceeds from the event. Just like that. She didn’t ask for anything in return. Addy put the whole thing together on her own time. She got the venue, organized the speakers and music, and arranged for the models to perform. Within a couple of months the show was held and it was very successful and Andre loved it. The event raised a lot of much needed money for Andre’s family. And just like that she moved on to the next one. She kind of reminded me of the old Lone Ranger show. The lone ranger would show up just in time to save the day and then just disappear without expecting anything in return, off to do it again somewhere else, barely giving anyone a chance to say thanks. Addy was this hero. I bet she doesn’t even know she is a hero. Helpers are like that.

The list of helpers is endless. Maritza Esqueda is another hero in her tireless effort to make things better for all people afflicted with cancer. Cristy Mercado leads a wonderful group of helpers who give all their free time to help children in need. They can be found at the hospital every holiday making the children’s lives brighter by bringing gifts and food. Luchelle Cordova, Jessica Cordova, Yoli Garza, and Lana De Leon can always be counted on to be there when someone is need. There are many others. All wonderful people bringing joy to the people who need it most. We can’t thank them enough.

When someone you love has cancer you will meet many people who also love someone who has cancer. You are drawn to their story because it is your story. You become a family of sorts, brought together by this terrible disease. You look out for each other. You support each other.

It is a tough road that has brought you together. But you are not alone. There are always helpers. They find you and they share their love with you. They bring a compassion to your story that makes thing better. They ease the pain. And they do it just because they can.

So remember that when things get bad, and they will sometimes, look for the helpers. There are always helpers that find their way into your life when you need them. Lean on them.

On behalf of Andre I personally want to thank all these wonderful people who give so much of themselves to help others. You are the helpers. You are my heroes.

5 thoughts on “THE HELPERS”