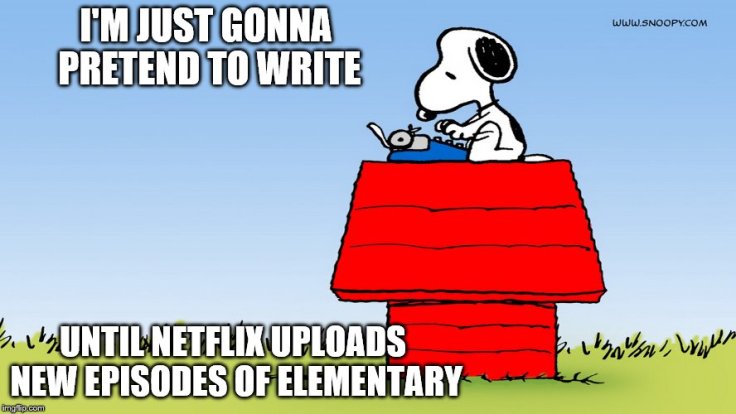 You should be writing, but you’re not. You have updates to do, but you’re just not feeling it today. Being on WordPress is not a job (except for those of you for which it is a job) and you probably should do what you can to enjoy it. It’s supposed to be fun, right?

Well it’s not always fun. Writing is not always fun. True story. But you got yourself on this stupid thing called WordPress and now you are trapped in between not wanting to write, and needed to update. Which one do you choose? If you’re me the answer is simple. Don’t write. Just don’t do it. It’s not a job. No one is writing me a check for it (feel free to do so though). No one will die if I don’t update regularly (well maybe a couple of you). And for sure the earth will keep spinning long after your blog is dead.

I like writing most times. But I also like not writing. I enjoy the hell out of not writing. Sometimes I “not write” intentionally even if I feel like writing. I might be at my place doing nothing and think to myself “hey I got some time, let me put some words down”. I open up my laptop and then I get another thought. Something along the lines of “Fuck you WordPress. You’re not the boss of me!”. That actually happened last night. See picture (ignore the pint of Intense Chocolate Chunk ice cream that my doctor said I should have stopped eating 5 years ago).

See what I did there? Had an urge to write and I killed it. Boom! Netflix. Boom! Elementary! Boom! Creamy Creations Intense Chocolate Chunk ice cream! That’s how you do it. Don’t let WordPress run your life. Fight the machine.

Of course 5 minutes later the ice cream is gone. Ten minutes after that I have solved the crime Holmes and Watson will take another 40 minutes to solve. And that new Iron Fist show Netflix just premiered is boring as hell and nothing like the comic book. So the writing feeling comes back rather quick. I opened up a tab on the laptop for WordPress.

But I’m a fighter. WordPress will not win tonight. It was 10 p.m. and I thought maybe I can just see what my daughter Lauren was up to (you know Lauren, the “blonde moments” girl). I needed a refill of my water so I yelled at her to get it for me. She was in her room and on her the phone. She’s always in her room on the phone. She had gone to the beach the other day and got massively sunburned and her calves were aching from standing in the sand all day long waiting for some stupid rapper wanna-be to show up. No way in hell was she going to get up. So I yelled out to her 3 times, and of course she ignored me all three times. Few things can get her out the room. I had no food to offer so I opted for the next best thing. Piss her off.

I ignored the open tab for WordPress and instead scoured the internet for something to send to Lauren that might get her out of the room. Nothing. Then I checked my Facebook newsfeed and lo and behold there it was. This should do it. See picture. Wait for it…wait for it…

I texted her the picture. Five seconds later I heard her scream. Then I hear her say “I’ll call you back!” and then her door swings open and she stomps out of her room.

Lauren-“Dad, what the hell!?”
Me- “What? I thought you liked cake?”
Lauren- “Who the hell makes a cake shaped like a cockroach?”
Me- “Get used to it. That’s your next birthday cake.”
Lauren-“Gross dad. Ugh.” (she then makes that almost throwing up sound)
Me-“Hey, since you’re up. Get me some more water.”
Lauren-“You serious? You’re 15 feet from the kitchen dad!”
Me-“Yeah, but it’s only 5 feet from where you are at.”
Lauren- “Ugh”.

Nearly needless to say I had to get up and get my own water. I was running out of time. WordPress was calling. I wrote a couple of emails and then stared at the open tab for WordPress. I was about to click it open when I looked up and noticed that one of my favorite shows “Naked and Afraid” was on. Suck it WordPress. I got a reprieve. I like this show. If you haven’t seen it is a show where they put a man and woman that have never met before butt naked in an extreme environment like the Amazon (the forest, not the place with 3-day shipping) for 21 days. They each get to bring one thing with them (like a knife or fire starter, or if you are a white guy from Kentucky, some duck tape). They then have to live with each other for 21 days and try and figure out how to find water, food, and make fire. They have to do this while at the same time avoid getting killed by all the indigenous snakes and spiders that are trying to kill them. Don’t worry they fuzz out all the private body parts (jerks). Except for their butts. Apparently you can show your ass on TV whenever you want nowadays. Ha. You thought I was going to write here “see picture”. You’re freaky. I like that in a blogger.

They should really just name the show “The Naked and Afraid 21 Day Diet” because all that really happens is the 2 people involved will just lose a bunch of weight because they are too stupid to find food. And there will be a lot of yelling. Have you ever been with a girl on a diet? There’s a lot of yelling. By the last day they just look like concentration camp victims. Except these idiots did it to themselves. God, I love this show.

Anyway, after 3 hours of Naked and Afraid it was almost 2 in the morning and time to get some sleep. I had thwarted the impulse to write. I had beat WordPress. Once more I came out on top. But that’s what I do. I don’t recommend this for the timid and weak (that means you). I suggest for you beginners that when you feel like writing just write. Take things slow. I am a professional procrastinator. What I have learned comes from a life time of developing these skills. Most of you aren’t ready for this.

So for now, until you reach my level of procrastination, go write something.