There goes my deposit.

I’ve done it a hundred times. I check to see if the spaghetti is ready by throwing one of the strands on the wall. If it sticks it’s ready. That’s what the cool people do isn’t it? I’m

sure I read somewhere that it is. It was on the internet so it must be true. This time though, I forgot to remove it from the wall. Weeks later I looked up and saw it still stuck there. When I peeled it off the paint on the wall came with it. There goes my deposit. Not that I know anyone who has ever gotten their deposit back. I don’t. But it was a nice dream while it lasted. A dream now dashed by a single strand of spaghetti I forgot about. A spaghetti strand that cost me $250.

If anyone asks about it I’ll just say it’s that famous silhouette of Alfred Hitchcock. No one would ask though. Not because no one knows who Alfred Hitchcock is, or even because it really doesn’t look at all like Alfred Hitchcock (whose name I first mistook for Truman Capote until I googled him, lol), it’s just that no one would know because I don’t let strange people in my house. Especially strange people who would be staring at my wall wondering what the hell that thing is on my wall. Nope. Not going to happen. Speaking of strange people…

La Security, the judge (and his wife aka the real judge), the Gringo-not-so-gringo, the renaissance man, and the ex-cop.

After about 3 years of hiding in the shadows in the community I live in someone finally dragged me out into the light. I hate it. Not the light. Okay well yes, the light too. I hate people. Well, okay, not all people. Just the people who want to talk to me. Lol. Lucky for me though, these folks are a bunch of good eggs. And like some eggs, they are a bit cracked. But nothing wrong with that. I love a good breakfast.

Anyway, because it is what people do, we now get together and drink coffee and stare at a fire and discuss wordly things. No topics off limits. No holds barred. No mas pantalones. Kidding, pants are required. But if you are going to get together and talk life this is the group you’d want to do with it.

La Security (aka La Vegan Security) is the security for the apartment complex. A former bounty hunter turned masseuse turned vegan. She spent the entire summer looking for reasons to shut down every Bar-B-Que outing at the apartment complex. A person could not strike a match and throw it into a BBQ pit without her super vegan senses being lit up at the same time. But she keeps the place safe so I giver her a pass on the vegan cult she has joined…for now.

The Renaissance Man. Imagine MacGyver meets Andrew Zimmerman meets Foresst Gump. This guy knows a lot about most things and a little about everything. Especially about what and where to eat and how to bump into crazy situations along the way. And he’s a dog lover so he can’t be too bad. He and La Security are a thing. It is a consensus among the rest of the group that in his many travels he somehow got into some mess with the law and La Security was dispatched to pick him up but instead she “worked something out” with him and he has been trapped in that something ever since. It is also rumored that La Security used to do “wet work” for the government back in the day. The rest of us are too afraid to ask.

The Judge is a well-known local politico who is a real nice guy…for a Republican. I don’t mind it really. The rest of believe the real judge is his wife and that she makes all the decisions anyway. When we aren’t all together drinking coffee and talking about life he can be found either putting his campaign stickers on vehicles without the owners consent, or, on non-election years, in an empty field next to the apartments shooting things with a bow and arrow. Word has it he never goes anywhere without his bow and arrows close by so we all try not to piss him off. He’s got my vote. Or rather his wife does. Lol.

The Gringo-not-so-gringo (too long I will just call him Red from now on) is the newest member of this group and one you’d easily mistake for a white guy (not that there is anything with that, inside joke, lol) . He came a long a few weeks ago. Sharp guy who spent most of his life growing up in Mexico with his missionary parents. Red has started up a business here recently, but has unfortunately fallen in with the wrong crowd (us, we’re the wrong crowd, lol). Red seems like a good guy. Or at least he was until he joined us. Only time will tell.

If you see us out there talking and drinking coffee and talking go ahead and wave. Wave goodbye. You can’t sit with us. lol

Land of the Lost

This little guy is a forgotten leftover from Halloween. I guess the neighbor just forgot all about him after putting away all the rest of his Halloween toys that he had out in front of his apartment door. There was a contest here at the end of October with prizes going to the

best decorated door for Halloween. Lauren had spent hours last year (and about a hundred dollars vying for the fifty dollar prize, lol) creating a masterpiece of a mummy that covered our entire door. It was really good I thought. So did everyone else who saw it. But some other door with a 5 dollar poster of a pumpkin somehow beat out her full length 3D mummy. She cried foul and tore down the mummy threatening to throw it in the swimming pool with the apartment managers name scrawled on the front of it in blood. I talked her out of it. She refused to even try to decorate the door this year. I don’t blame her. That probably saved lives.

Not that she had a chance this year. All the Halloween fanatics went out for blood this year and most of the decorations were amazing. But this little guy is about the only evidence left of Halloween now. If he sticks around a few more days I am going to adopt him and just take him home (unless La Security catches me).

I have coffee spoons now. Never in my life have I had coffee spoons. It was always just teaspoons and tablespoons. Now I have a utensil for every conceivable situation. The reason for this is that a wonderful neighbor moved away a few months ago and she could not take everything with her. So among other things she left me an entire utensil set. She was an adorable white woman in her 90’s quite mobile for someone that age. Everyone who met her loved her.

She was the kind of person that would just walk up to anyone and talk to them. I miss her kindness. She would always bake and cook things and call us over to eat with her or to pick some up. She would have loved to sit and drink coffee with us if we had been doing that when she was here. But she’s not. She moved up state with her daughter and is doing fine last I heard.

I digress. I have more utensils now than I know what to do with. Salad forks? Really? That will be the day. But the coffee spoons have gotten some good use. I don’t know what I would do without them now. If I didn’t have them I would surely be pacing around the house for hours every morning wondering how to measure my cream and sugar into my coffee. I’d be lost.

But thanks to Hazel I am not. She was a good egg too and I salute her every time I make a cup coffee at home.

Waste not want not.

My daughter Lauren is rarely wasteful of things she herself pays for (she pays for almost nothing). But when it comes to things that I pay for is quite wasteful. She once used an entire cartridge of ink for some picture she wanted. I remember getting mad at her afterwards and I warned her that she wouldn’t have permission to use my printer if she wasted ink.

The the other day she accidentally made 5 copies of a picture of Rihanna and I caught her doing it. She had meant to print only one for a class project in an elective art class she was taking. So as not to “waste ink” she used every single one of them. I should have just said nothing. 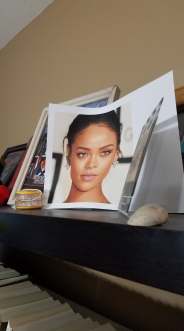 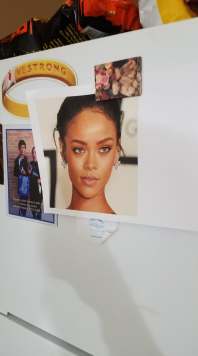 Yeah, I am not even going to show you the 3 pictures of Rihanna that stare at me every time I go to my bathroom. I wonder sometimes what evil things I might have done in past lives to deserve this girl. I just don’t know.

Anyway, enough random thoughts for the day. I hope you all go out and be kind to someone today. Especially if that someone is me.

See you guys on the other side.

The afterlife, not the border wall.

7 thoughts on “No Mas Pantalones #5: Random thoughts of a man without pants.”