The other day, and due to reasons well beyond my control, I turned 55. By the other day I mean about four months ago, and I was not at the time at all really impressed by the fact that I turned 55. That was until I realized that reaching this important and pivotal age in my life meant that I would now be eligible for what the regular folks can’t have. What they only dream of. That’s right. I can now, by virtue of reaching the old double nickels, be part of an elite group of Americans whose life has finally reached that stage where life starts giving back just a bit more than it takes. Hold on to your seats folks:

I can now order from the Senior Citizen Discount side of the breakfast menu!

Had my first Senior Citizen breakfast the other day at a little place called “Jimmy’s Egg”. Great little restaurant. Mostly breakfast. Normally, and I use that word loosely, I don’t like restaurants that don’t serve Mexican food. My daughter calls me a food racist. In a perfect world, a restaurant that doesn’t make homemade flour and corn tortillas would just not exist. But this isn’t a perfect world, it’s Texas. Which is as about imperfect as things get. But all that is for another post.

Back to me getting old.

I had my first breakfast that I could have only earned because I have been on this earth for 55 or more years. That is the cut-off age for this privilege of getting less food for less money. Yeah, that’s what it is. They give you less food for less money. Not a bad idea really. For some time now I have been leaving a good portion of the food on the plate anyway (I probably have a different idea of what a good portion is). Our portions are pretty big here (it’s Texas). So I thought that today this might not be a bad idea to give it a try and save some money in the process. I went with the meal that included one egg, 2 slices of bacon (hey, it’s Texas) and half a waffle. My sister and I shared an order of toast. You can’t eat a white breakfast without toast. (Hey man, I don’t make the rules) 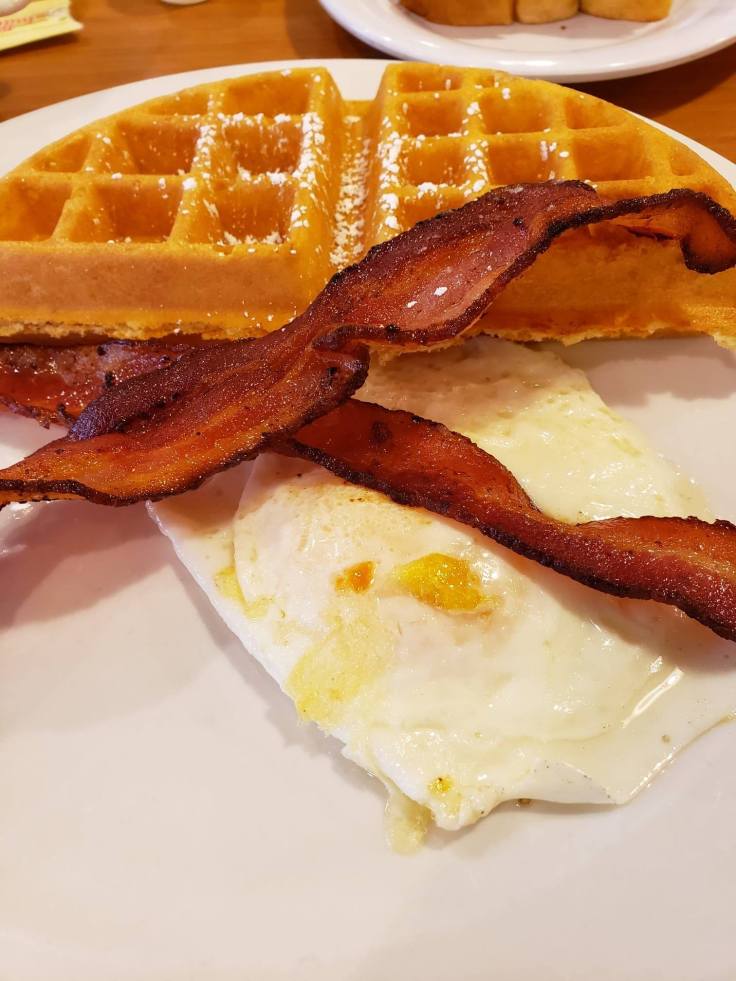 Don’t even get me started on the half a sandwich conundrum.

I just don’t know. Might have to slip the waiter an extra fiver just to let me sneak into the kitchen and see for myself. We’ll see. I’ll get back to you on that.

A few months back a good friend of my gave me a vote for me political sticker bumper sticker to put on my car. Nope, scratch that. He didn’t trust me to put it on my car myself so one day I walked out to the parking lot and found out he had put it on there himself. Smart move.

So, from then on when I walked out to the parking lot to look for my car I identified it quickly by the political sticker on the back windshield of the car. I looked for nothing else.

The other day, without my knowledge, he took the sticker off my car. Apparently, the political winds change quickly in south Texas. Long time friends quickly become strangers in the south Texas political arena. Just when you thought someone was scratching your back, they suddenly pull out a knife and stab you like the final scene of the movie “American Me”. Orale. Not cool. I’m still voting for this guy.

But anyway. Let’s not talk politics.

The following morning I went out to have breakfast but had parked the car facing my front door so had not used the sticker to identify my car when I left the house. Later when I left the restaurant I had parked the car with the back window facing the exit door of the restaurant. I was standing right in front of it when I left the restaurant and looked around for my car. It had the back windshield to me, and so because it didn’t have the sticker I refused to believe it was my car. I even remember glancing down at the license plates and that didn’t help. My mind refused to accept it was my car without the sticker on it. I just couldn’t see it.

My sister was with me and pointed at my car and asked if that was it. I said no. She said she didn’t think so either. No way that was my car.

It makes me wonder how our minds get so lazy and take the easiest route possible when making an observation. It takes the path of least resistance when making a decision. That cannot be a good thing.

One of my neighbors likes to put stuff outside her door for the different holidays. I don’t know her name. I call her the Wiener Dog girl. I call her this because she has two gorgeous wiener dogs that she parades around the place once in a while. Really beautiful dogs. I don’t know their names either. I call them Oscar Mayer and Ball Park.

She doesn’t usually put them on a leash, but that’s fine because the dogs are super obedient. Nothing at all like Blue. He pretty much does what he wants. He’s cool like that.

Anyway. During Halloween Wiener Dog Girl puts out a skeleton of a wiener dog. I call him Fred. Blue loves Fred. Fred is cool. You remember Fred. I have posted about him before.

It’s not just me right? No. It can’t be just me. There is something about this rabbit that bugs me and I don’t know what it is. Maybe because he looks like he is phasing in and out of our dimension? I have no idea what it is. If anyone can figure it out let me know.

Anyway. Hope all of you have a great week.

6 thoughts on “Things I Overheard While Talking to Myself #2”